The SO2R general diagram below shows main sections of the SO2R setup. This is my preference shown on a diagram below with two radios, two computers and two amplifiers . It is easier to manage each band from dedicated keyboards and in general the total setup is simpler when all separated.

With today’s modern equipment and software, it can be only one radio, one amplifier and one computer for SO2R setup. Some HAMs prefer one keyboard and some two but it is all a personal preference and will not change the whole idea of the SO2R operations.

I can recommend this National Contest Journal article which explain all parts of the SO2R setup.

Tribander antenna with Triplexer and BPFs gives three fully independent bands which can be used in any station setup, such as SO2R, MS, M2 and MM.

Today’s tribander is a full size element multi-band antenna with a performance closed to a mono-band antenna. A traditional tribander with LC traps is quite popular today as well. If you are limited by space to install a few towers it could be the only option to try a serious contesting in SO2R category.

If band isolation of the filter system of Triplexer and BPFs is a sufficient number than there is no interference between bands at all except the 2nd harmonics from 20M TX to 10M band RX.

Lets start with a radio blocking level. This level means that the radio blocked and no reception can be done.

As an example, for the main receiver of TS-590S and PREAMP OFF the worst case is +20dBm and with PREAMP ON it is +10dBm with OFFSET frequency >100KHz ( Up-Conversion).

Now, lets calculate the minimum band isolation with different output power levels with level of 0.7 volts going to the 2nd radio while 1st on a TX mode.

At this level of 0.7 volts the second radio will be blocked while the first one transmitting, so we need a band isolation to get that level lower.

How to define the comfortable level of band isolation when we can operate both radios the same time?

I can assume that -13dBM or lower signal level can be handle by most of today’s radio.

The numbers below are a very safe levels of a band isolation for using Tribander antenna with Triplexer and connected BPFs:

So, for a low power setup Triplexer with BPFs system should deliver -66dB of adjacent band isolation to work with any available radios including SDRs with a 100W output power.

VA6AM High Power Triplexer with BPFs set is able to deliver better than -85dB isolation level on any band combinations.

WRTC contest is a M2 category for participating teams. It means they use two bands simultaneously all the time and two switching approaches can be used.

Different filter systems can be used for the SO2R setup: 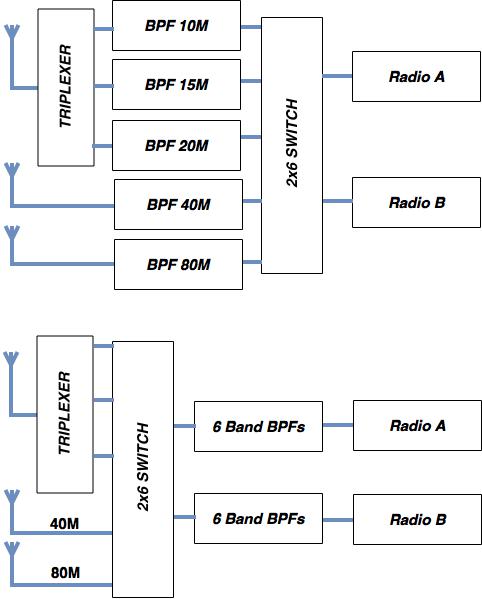 I think the first approach has some benefits, such as simpler switching and as a result simpler way of replacing any BPF if broken and less expensive.

The same time the first approach requires a 2 x 6 switch with good band isolation. It is not a problem at all for low power setup but with a higher power it should be considered.  Please, see some graphs and measurements.

For a high power setup, 2×6 switch could be a limitation factor for high band isolation and some other approach can be applied using 1×2 switches which can be designed with up to -90dB of a port isolation. I can say that if your 2×6 or 2×8 switch can deliver -70dB or better of band isolations for 28MHz it is a good switch to use.

Please, see below some of possible connection diagram. 1×2 switches installed a little different than  those A/B switches on NP2N diagram below allowing more band combinations for every radio in SO2R or M2 configuration. 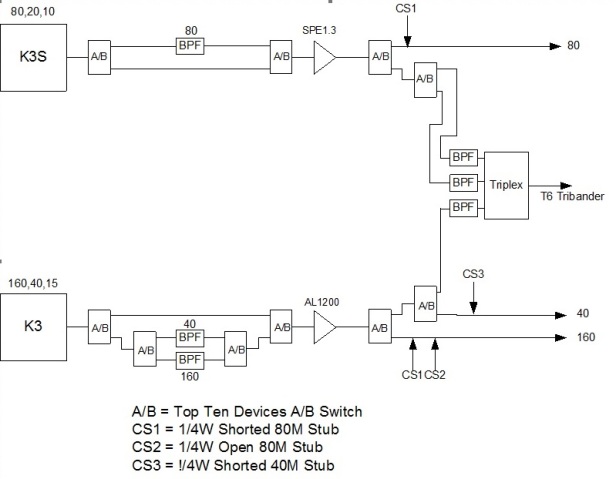 I highly recommend that every 1×2 switch installed after BPFs contains 50Ohm resistor to connect unused band port with 50 Ohm load.

It is up to 7.7 dB better band isolation with 50 Ohm loads connected to every port.